Monterrey: Confronting the Future
Traditional Mexican characteristics – – family values and a willingness to work – – have combined with the city’s proximity to the United States to create a strong and prosperous business community, now struggling with the country’s economic downturn.
Chiapas: Rough Road to Reality
In the poor state of Chiapas, revolution is afoot. The Zapatistas, a group of rebel Indian Farmers, have declared war on the Mexican government and demanded the land reform pledged by Mexico’s 1917 constitution.
Yucatan Peninsula: Maya Heart, Modern Face
The Yucatan countryside, populated with 900, 000 indigenous Maya, is emptying as the peninsula’s beach resorts draw foreign tourists and offer promising jobs.
Tijuana and the Border: Magnet of Opportunity
Mexico’s border cities lure foreign investors with cheap labor and proximity to U. S. markets, while beckoning workers from across Mexico with a chance for a new beginning.
Heartland and the Pacific: Eternal Mexico
Harsh economic realities are unable to shake the ancient foundations of family and society in the heartland of Mexico.
Veracruz: Gateway to the World { Illustrations text}
Rich in oil, seafood, and cultures drawn from distant lands, Veracruz is also a world of back- road virtues where tradition reigns.
Sierra Madre: Backbone of the Frontier
The rough and forbidding Mother Mountains of the West have long proven a haven for reclusive Indians and a diversity of wildlife. The existence of both is being forever altered by incursions of timber companies and narcotics traffickers in this shrink; i
Mexico City: Pushing the Limits
Once elegant and sedate, Mexico City is now a sprawling megacity of at least 16 million people. Though poverty and unemployment are rampant, migrants pour in daily from the provinces hoping to find jobs and prosperity.
Emerging Mexico: Bright with Promise, Tangled in the Past
A team of National Geographic correspondents travels the length and breadth of Mexico to learn how its people are facing the current economic and political crisis – – and shaping a promising future.

Be the first to review “National Geographic August 1996” Cancel reply 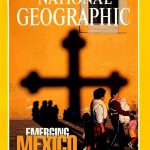