Land of the Ancient Basques
An American born of Basque parents explores the western Pyrenees on the France- Spain border, land of his forefathers.
The Age of Sail Lives On at Mystic
The author, also a sailor, finds special pleasure in Mystic Seaport, Connecticut, a living maritime museum that preserves square- riggers, schooners, and heirlooms from the age of sail.
The Incredible Salmon
Among the world’s great voyagers, salmon crisscross the Pacific but return to home rivers in the Pacific Northwest to spawn and die.
Crystals, Magical Servants of the Space Age
Synthetic crystals lie at the heart of modern technology, from solar cells for satellites to the ruby rod of the laser.
South to Mexico City
Heading from the U. S. to the site of the 1968 Olympic Games, the author and his family drive to out- of- the- way sights in Mexico, often referring to accounts of early Indian empires described by 16th- century conquistadores.

Be the first to review “National Geographic August 1968” Cancel reply 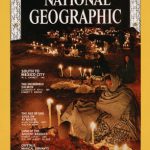