The Coasts of Normandy and Brittany
Before troops and bombs battered Brittany and Normandy, dairy farms, fishing villages, apple orchards, and devout citizens characterized the coastal French provinces.
A Navy Artist Paints the Aleutians
Plagued by Japanese bombs and harsh winds, an artist enlisted in the U. S. Navy lives on the inclement, foggy Alaska archipelago known as the Aleutian Islands, painting scenes of the Second World War.
Capturing Giant Turtles in the Caribbean
Tremendous sea turtles glide through the crystal waters of the Caribbean Sea off Nicaragua’s Mosquito Coast.
Fit to Fight Anywhere
American military troops must train to adapt to any terrain and climate, from Arctic mountains to steamy tropical jungles.
Yanks in Northern Ireland
These photographs show Allied soldiers in Northern Ireland serving as ambassadors of good will and being welcomed by the Irish.
Iran in Wartime: Through Fabulous Persia, Hub of the Middle East, Americans, Britons, and Iranians Keep Sinews of War Moving to the Embattled Soviet Union
In war, Iran, a country of modern cities and scenic mountains, is the strategic crossroads of the Middle East because its roads and railways enable U. S. Army troops to deliver supplies to Russia.

Be the first to review “National Geographic August 1943” Cancel reply 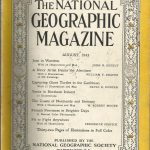