Busy Corner- -the Cape of Good Hope: Ships Bound for Faraway Battlegrounds Stream Past Capetown, Tavern of the Seas, and Other Ports of Virile South Africa
Because enemy troops obstruct the Mediterranean, all Allied war supply boats must pass South Africa’s mountainous Cape of Good Hope and stately Capetown.
Baja California Wakes Up
As Mexican and American troops work to defend Baja California from possible Japanese attack, the Seri Indians live placidly on this arid, 800- mile peninsula, fishing the rich Pacific waters.
Price of Free World Victory { The People’s Fight Against Slavery}
On May 8, 1942, United States Vice President Henry Wallace delivered this speech, which labels the current war as a fight between a slave world and a free world.
Blood, Toil, Tears, and Sweat : An American Tells the Story of Britain’s War Effort, Summed up in Prime Minister Churchill’s Unflinching Words
Fending off German troops with a stern will, British soldiers, pilots, factory workers, and civilians form one of the greatest military forces in the world.
Unknown Japan: A Portrait of the People Who Make Up One of the Two Most Fanatical Nations in the World
Though Japan studies American culture, the hardworking Japanese are an enigma to Americans, who struggle to understand their enemies in the Second World War.
The Pith of Peru: A Journey from Talara to Machu Picchu, with Memorable Stopovers
Crumbling Inca cities still stand in the high mountains of Peru, a country steeped in Spanish culture and Incan history.

Be the first to review “National Geographic August 1942” Cancel reply 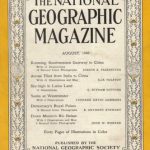