The Shore Birds, Cranes, and Rails: Willets, Plovers, Stilts, Phalaropes, Sandpipers, and Their Relatives Deserve Protection
Although many species of plover, ptarmigan, killdeer, and sandpiper are abundant in the Arctic tundra surrounding Hudson Bay, the area must be protected to ensure the birds’ future success.
The Pilgrim Sails the Seven Seas: A Schooner Yacht Out of Boston Drops in at Desert Isles and South Sea Edens in a Leisurely Two- Year Voyage
A crew of eight sails a schooner yacht around the world in two years, finding adventure on exotic islands such as Tahiti, American Samoa and Bali.
Speaking of Kansas
Dust storms, drought, and tornadoes occasionally pierce the tranquillity of the vast farmland of Kansas.

Be the first to review “National Geographic August 1937” Cancel reply 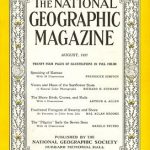