Designs From Nature { Biomimetics; Biomimetics: Design by Nature}
Burs on a dog’s coat led to the invention of Velcro. That’s an example of biomimetics- the young science of adapting designs from nature to solve modern problems. Now it may be coming of age. BY TOM MUELLER PHOTOGRAPHS BY ROBERT CLARK
Africa’s Ragged Edge: Journey Into the Sahel { The Sahel; Lost in the Sahel}
The vast swath of sub- Saharan savanna is a world of unseen lines. Crossing one of them landed the writer in a Sudanese jail. BY PAUL SALOPEK PHOTOGRAPHS BY PASCAL MAITRE
Last Ride for Rickshaws? { India’s Rickshaws; Kolkata Rickshaws; Last Days of the Rickshaw}
The city of Kolkata has a love- hate relationship with its rickshaws. Are they a symbol of exploitation? Or just a handy way to get around? BY CALVIN TRILLIN PHOTOGRAPHS BY AMI VITALE
Hawaii’s Wild N? Pali Coast { N? Pali Coast}
Golden beaches and soaring cliffs make this rugged edge of Hawaii a paradise on Earth. But tourists and trash are taking a toll. BY JOEL K. BOURNE, JR. PHOTOGRAPHS BY DIANE COOK AND LEN JENSHEL
Chimps on the Hunt { Fongoli Chimps; Almost Human: Fongoli Chimps}
The Fongoli chimps of Senegal will break off a branch, sharpen it with their teeth, and use it to hunt bush babies. That’s just one of the recent discoveries that underscore the ape- human connection. BY MARY ROACH PHOTOGRAPHS BY FRANS LANTING

Be the first to review “National Geographic April 2008” Cancel reply 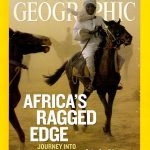