Ozarks Harmony
Rich in natural beauty and native pride, the hills that straddle Arkansas and Missouri now host an influx of newcomers whose ways sometimes strain a staunchly independent culture.
Rongelap Atoll { Testing the Waters of Rongelap}
The Pacific atoll, heavily contaminated by radioactivity during a 1954 nuclear bomb test, remains off- limits for human habitation, yet in its waters life abounds.
Australia By Bike, Part Three: Closing the Circle
Surviving a self- imposed ordeal of 10, 000 wind- blasted miles, an American journalist completes a circuit of his adopted country and finds himself in a different place.
Roman Shipwrecks { High- tech Search for Roman Shipwrecks}
Probing the depths of the Mediterranean Sea, a nuclear submarine locates the remains of trading vessels that sank west of Sicily 2, 000 years ago.
Life Grows Up { The Rise of Life on Earth- -Life Grows Up}
Bizarre organisms filled the seas more than half a billion years ago, foreshadowing the rise of more complex creatures. Their fossils are rewriting the history of life on Earth.
The Vanishing Prairie Dog
Shoot them or save them? Opinions on prairie dogs divide the American West. What’s clear is that these rodents are disappearing, along with their entire ecosystem.
Orinoco River { The Orinoco: Into the Heart of Venezuela}
The bewitching song of El Dorado – – fabled fountainhead of gold – – still echoes along Venezuela’s longest river as it flows past rain forest villages, cattle ranches, and natural caches of mineral wealth.

Be the first to review “National Geographic April 1998” Cancel reply 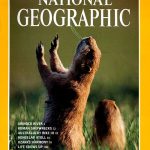