Deadly Ambush in the Serengeti { Giant Crocodiles- -Deadly Ambush In the Serengeti}
When herds of migrating wildebeests drink dwindling pools of Tanzania’s seasonal Grumeti River, the water turns red with blood: Before herds move on, giant crocodiles feast on the calves and the careless.
Mauritius: Island of Quiet Success
Shortchanged by nature and beset with social problems, this small Indian Ocean nation has turned itself around, thriving today with a vigorous economy, a democratic government, and a wealth of separate yet cordial cultures.
Alone Across the Arctic Crown
An Alaska outdoorsman recounts his epic Arctic trek through the Brooks Range. Traveling by sled, by canoe, and on foot, he endures blizzard, grizzly, frostbite, and 1, 460 miles of grim isolation.
Cairo- -Clamorous Heart of Egypt
In this swollen city of 13 million, people make their homes where they can, even in ancient tombs. Facing severe pollution and high unemployment, Cairenes somehow retain a sense of serenity.
Andrew Aftermath
The costliest natural disaster in U. S. history, Hurricane Andrew spawned widespread devastation – – and unshakable courage – – in Florida and Louisiana. Survivors rebuild as scientists learn more about how hurricanes work.

Be the first to review “National Geographic April 1993” Cancel reply 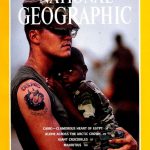