Huzza for Otaheite! ( Tahiti) { A New [ Bounty] Sails to Tahiti; Huzza for Otaheite! }
Staff writer and photographer Luis Marden returns to the South Pacific as third mate aboard a replica of Captain Bligh’s square- rigged Bounty.
The Nation Honors Admiral Richard E. Byrd
The Vice President of the United States presides over the dedication of a Society- commissioned statue of the great explorer, which will sit on the Avenue of Heroes near Arlington National Cemetery.
New Zealand: Gift of the Sea
A North Islander writer and a South Islander photographer put their talents together for this portrait of their country.
Shooting Rapids in Reverse! Jet Boats Climb the Colorado’s Torrent Through the Grand Canyon
Four jet boats run against the current, and three make it to the end.
Our Society Welcomes Its 3, 000, 000th Member
The Society celebrates a rising wave of membership applications by honoring an Omaha schoolteacher.
Twenty Fathoms Down for Mother- of- Pearl
Pearl- shell divers of the South Pacific descend without mechanical assistance to collect the luminous material valued by makers of jewelry, knife handles, and buttons.
Sapsucker Woods, Cornell University’s Exciting New Bird Sanctuary
The nation’s first research laboratory for the study of birds, sets up shop in Ithaca, New York, to solve mysteries of bird behavior.

Be the first to review “National Geographic April 1962” Cancel reply 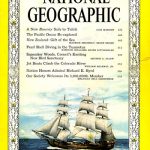