Seeing Birds as Real Personalities: Songsters Reveal Fascinating Traits to a Canadian Bird Lover
For 22 years the author has studied the different species of birds native to his home in Erindale, Ontario. He provides them with food, nesting places, and space to fly, and they reward him with their trust.
Roving Maryland’s Cavalier Country: A Modern Pilgrim Savors the Free State’s Past in Stately Homes Along the Tidewater Reaches of Chesapeake Bay
Each spring, the Federated Garden Clubs of Maryland sponsor a house and garden tour of southern Maryland’s stately homes, many of which date from before the Revolutionary War.
Troubled Waters East of Suez: Our Navy Keeps Watch in the Strategic Middle East, Which Holds Two- thirds the World’s Oil and a Quarter of Its People
The U. S. Navy, on patrol in the Middle East, from Suez to Calcutta, keeps watch over two- thirds of the world’s oil and one- fourth of its inhabitants. The author recently commanded the Navy’s forces in this area.
Honey- Guide: The Bird That Eats Wax: This Feathered African Entices Man and Animal to Raid Bees’ Nests, Waits While They Steal Honey, Then Dines on the Comb
A species of African bird related to the woodpecker, this creature eats and digests beeswax, and leaves its eggs in the nests of other birds. Unable to break open a bee hive, the honey- guide waits until man or animals have taken the honey, and then eats
Ischia, Island of the Unexpected: Capri’s Next- door Neighbor Offers Warm Italian Hospitality, Natural Charm- -and Baby Octopus Sandwiches
Capri’s next- door neighbor, Ischia, offers warm Italian hospitality, scenic charm, and the occasional baby octopus sandwich.
Coal Makes the Saar a Prize: Belching Chimneys Write a Record of Prosperity in the Sky Above This Rich Valley Between France and Germany
Coal is at the heart of the postwar prosperity of the Saar Valley between Germany and France. Its autonomous condition, however, means its political future is less than clear.
Sugar Weather in the Green Mountains: Maple Sap Runs with Springtime’s Warmth- -Syrup and Sugar Bring Welcome Dollars to Vermont Farmers
Sugaring, or the process of creating maple syrup, usually takes place in March and April in Vermont, when cold nights and warmer days make the maple sap rise.

Be the first to review “National Geographic April 1954” Cancel reply 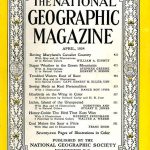