Grand Canal Panorama
A voyage on the nearly 2, 500- year- old Grand Canal reveals the real heart of China.
The Restoration of Colonial Williamsburg
Williamsburg, Virginia, named the capital of colonial Virginia in 1699, was carefully restored over the course of more than nine years so that the future may learn from the past.
The Salzkammergut, a Playground of Austria
A paradise of mountains, valleys and lakes often called the Switzerland of Austria, the area surrounding the beautiful city of Salzburg heartily celebrates various festivals.
The Saguaro Forest
East of Tucson, Arizona, peculiar giant saguaro forests thrive, havens for gila monsters, owls, coyotes, bobcats, and quail.
The Genesis of the Williamsburg Restoration
John D. Rockefeller, Jr. , who contributed funds to the restoration of Versailles, Fontainebleau and Reims, explains why he chose to fund the restoration of the colonial town of Williamsburg, Virginia.

Be the first to review “National Geographic April 1937” Cancel reply 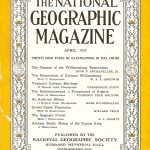