La Salle’s Last Voyage
In 1686 the Belle ran aground off Texas, ending a French explorer’s quest to reach the Mississippi by sea. Now the wreck surrenders its secrets.
India, Turning Fifty { India: Fifty Years of Independence}
Home to nearly a billion people, Asia’s giant democracy struggles to fulfill the dream born with its freedom from Britain 50 years ago.
The Dawn of Humans: Expanding Worlds
Fleet- footed and skilled at tool making, Homo erectus was probably the first member of our human family to venture out of Africa.
Iceland Volcano { Iceland’s Trial by Fire}
A volcanic eruption ripped open the island- nation’s largest glacier, unleashing the worst flood in 60 years.
Alaska Bike Trek { Biking Across the Alaska Range: A Wild Ride}
After 775 bone- rattling miles of glaciers and gravel bars, a trio looks back at an awesome mountain- biking adventure.
Pythons { Hunting the Mighty Python}
Gbaya men in central Cameroon stalk the huge snakes for meat and skin by crawling into their burrows and hauling them out bare- handed.

Be the first to review “National Geographic May 1997” Cancel reply 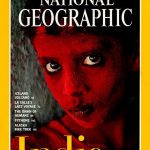