In Manchuria Now
After the end of World War II, Manchuria remained a battleground. The Japanese and the Soviets are gone, leaving destruction behind them, and Chinese forces battle for control.
Miracle Men of the Telephone
In observance of the centennial birthday of Alexander Graham Bell, inventor of the telephone, NATIONAL GEOGRAPHIC magazine presents the story of the Bell Telephone Laboratories, which carry on the work that Bell began.
Fishing in the Lofotens
With the introduction of modern equipment and stonger boats, cod fishing off the coast of Norway’s Lofoten Islands has changed, but the fishermen still retain older traditions.
Weighing the Aga Khan in Diamonds
A photo essay shows the diamond jubilee of the Aga Khan, leader of the Ismaili Muslims. In honor of the occasion, his followers collected the cash equivalent of 243 lbs. ( his official weight) in diamonds for charity, raising $ 1, 400, 000.
I Become a Bakhtiari
The author is given a wartime assignment to meet the chief of the Bakhtiari, a tribe of central Iran, and to obtain their cooperation for construction of a road and a dam in their territory. He relates how, with the help of an Iranian businessman, he acc
Shad in the Shadow of Skyscrapers
Shad fishing on the Hudson River outside New York City is a long- established but little known industry, that provides a living for New York and New Jersey fisherman.

Be the first to review “National Geographic March 1947” Cancel reply 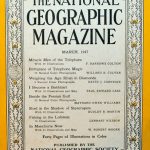