Battleship [ Missouri] Comes of Age
A color photographic essay shows the U. S. S. Missouri at war.
Heroes’ Return
The U. S. Army hospital ships transport wounded World War II veterans back home. William H. Nicholas interviewed the patients, staff, and crew of one such ship, the Saint Mihiel, as it docked at the port of Charleston, South Carolina.
Return to Florence
Benjamin C. McCartney first saw Florence, Italy, as a student in the spring of 1939. Five years and 48 bombing missions later, the author returns to find a city much changed by World War II.
8th Air Force in England
A colorful photographic essay depicts the life of the 8th Air Force in England, at work waging an air war against Germany.
What Luzon Means to Uncle Sam
The Philippine island of Luzon has gained strategic importance in the Allied war effort, as the war in the Pacific draws to a close.
A City Learns to Smile Again
Nancy, France, was occupied by the German army in 1940. Frederick G. Vosburgh visits the city after liberation, as residents try to rebuild their shattered city and lives.

Be the first to review “National Geographic March 1945” Cancel reply 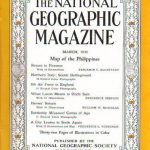