Dinkelsbühl, Romantic Vision from the Past
The perfect example of a fortified medieval town, Dinkelsbuhl, Germany, preserves a traditional atmosphere in the appearance of its buildings – – no modern signage is permitted.
A Modern Saga of the Seas: The Narrative of a 17, 000- Mile Cruise on a 40- Foot Sloop by the Author, His Wife, and a Baby, Born on the Voyage
A three- year tour takes a Norwegian novelist and his family more than halfway around the world, with ports of call including the Canary Islands, the Panama Canal, Tahiti, and Australia.
Smoke Over Alabama
Factories and mines replace Indian campfires as Alabama encourages industrial growth, and schools of all sorts bloom like the famous azaleas in this southern state.
Winter Sky Roads to Isle Royal
Resident moose, often spotted in summertime, elude the camera once the snow falls in Isle Royal, a 50- mile- long island in Lake Superior.

Be the first to review “National Geographic December 1931” Cancel reply 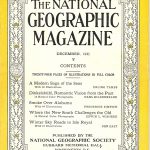