Midway–the name evokes images of insurmountable odds and heroic sacrifice on the part of the U.S. Navy in 1942, for it was this battle (and those of the Coral Sea and Guadalcanal) that stemmed the tide of Japanese aggression in the Pacific and began the march to victory that would end in Tokyo harbor in August 1945. In this rich visual and narrative account, Ballard deftly intersperses chapters on the Battle of Midway with a fascinating account of his search for the U.S.S. Yorktown, which was sunk by a Japanese destroyer on June 7, 1942. Period photographs from the battle are combined with those of the Yorktown as she rests today, and paintings by marine artist Ken Marschall add detail to complete the record. The lively narrative is punctuated with two Japanese and two American oral history accounts of the battle. As with his books on the Titanic, the Bismarck, and the ships of Guadalcanal, Ballard has once again produced a visual tour de force that will evoke memories in those remaining veterans of what the late Gordon W. Prange termed the “miracle at Midway” while firing the imaginations of a younger generation. Highly recommended.
-Harold N. Boyer, Springfield Twp. Lib., Aston, PA
Copyright 1999 Reed Business Information, Inc.

Be the first to review “Return to Midway” Cancel reply 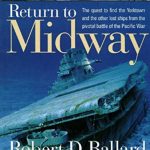