Year after year, hundreds of millions of visitors spend more than a billion hours enjoying the magnificent, astonishingly diverse realm overseen by America’s National Park Service. And the National Geographic Society has been involved with this forward-looking, environmentally-minded department from the very beginning.

This extensive travel planner covers not just the 58 official National Parks but also the nearly 350 additional properties in the Park Service’s domain. The premier Parks are described in detail, but equal attention is given to the National Monuments, Memorials, Preserves, Historic Sites, Battlefields, Cemeteries, and Seashores, not to mention a network of “National Trails” and even the intriguingly referred to “Affiliated Areas.” From Yellowstone to the Statue of Liberty, from the hallowed ground of Gettysburg National Military Park to the Pacific waters shrouding Hawaii’s U.S.S. Arizona Memorial, this catalog spans American history and territory both, with practical advice on how to reach each park, when to go, and what to do there. 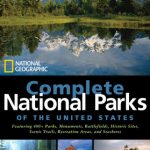