Porpoises: Our Friends in the Sea
Subject of many studies of intelligence and communication, the bottlenose dolphin navigates by a sound- sensing system more accurate than man- made sonar.
The Philippines, Freedom’s Pacific Frontier
The diverse peoples of the first modern democracy in East Asia are imbued with American ideals but suffer from poverty and corruption.
Canadian Rockies, Lords of a Beckoning Land
A thousand- mile spine on the British Columbia- Alberta border displays dramatic scenery of sheer mountains and clear lakes, and mining for coal and timber.
Mr. Jefferson’s Monticello
An architect of America’s independence also planned his hilltop home near Charlottesville, Virginia, to reflect practical ease and ideas gleaned from foreign travels.

Be the first to review “National Geographic September 1966” Cancel reply 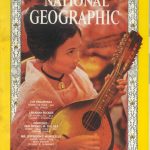