1898: The Bells on Sable
Mr. and Mrs. Alexander Graham Bell visit Sable Island and search for the bodies of friends lost in a shipwreck.
America’s 6, 000- mile Walk in Space
NASA’s manned flight program brings back dramatic photographs of Maj. Edward H. White II, orbiting at 17, 500 miles per hour. Tethered to Gemini 4, he made a 21- minute sortie, the longest space walk to date.
Asian Insects in Disguise
Curator of entomology at the California Academy of Sciences photographs and describes remarkable insects that mimic plants in Southeast Asia.
Man’s Own Mountains, the Alps { The Alps: Man’s Own Mountains}
A staff member takes his family on a summer ramble to understand the geology, history, and human uses of Europe’s famous range.
National Geographic’s Newest Adventure: a Color Television Series
The Society’s President and Editor announces four inaugural films to be broadcast during the 1965- 66 television season, starting with Americans on Everest.
U. S. Air Force: Power for Peace
A proponent of peace through military strength, a former U. S. Air Force Chief of Staff ( 1961- 65) and Society trustee, recalls personal experiences that illustrate changes in the Air Force during his lifetime.
Of Planes and Men: U. S. Air Force Wages Cold War and Hot
Staff writer and photographers participate in wartime missions in Vietnam to understand the variety of combat readiness of the U. S. Air Force. Visiting bases in 20 states and nine foreign countries, they report on missiles, planes, and orbiting laborato
Safe Landing on Sable, Isle of 500 Shipwrecks
The Society’s President and Editor sails his yawl to the island off Nova Scotia where the Labrador Current meets the Gulf Stream, and recalls stories told by his grandfather Alexander Graham Bell.

Be the first to review “National Geographic September 1965” Cancel reply 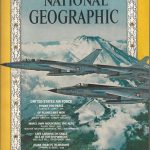