The Black Hills, Once Hunting Grounds of the Red Men
Home to buffalo and deer, the region around the rugged Black Hills of South Dakota is also home to the Sioux, Cheyenne, and Crow people.
Who Treads Our Trails? A Camera Trapper Describes His Experiences on an Island in the Canal Zone, a Natural- History Laboratory in the American Tropics
From a forest lookout perch, the author observes animals who take their own pictures when they trip his wire- rigged cameras.
Our Transatlantic Flight
Pioneering pilot Comdr. Richard E. Byrd tells the story of his flight from New York to Paris, which ended in a dramatic yet casualty- free forced landing in the water near Ver- sur- Mer.
The Great Mississippi Flood of 1927: Since White Man’s Discovery This Mighty River Has Served Him Well, Yet It Has Brought Widespread Devastation Along Its Lower Reaches
Described by Herbert Hoover as the greatest peacetime disaster in our history, the Mississippi River flood of 1927 caused millions of dollars in property damage but united the nation in efforts to help the victims.
Living Jewels of the Sea
A single cup of seawater contains a microscopic menagerie of creatures upon which other sea life depends.

Be the first to review “National Geographic September 1927” Cancel reply 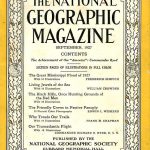