The Second Stratosphere Expedition { A Report of the Second Stratosphere Expedition}
The July 1935 flight of the helium balloon Explorer II failed because of sudden balloon deflation, but is rescheduled for October 1935.
Exploring the Ice Age in Antarctica
Rear Adm. Richard E. Byrd describes his second expedition to Antarctica during which he and his team of 55 men gathered data proving that its lands comprised a single continent.
Sungmas, the Living Oracles of the Tibetan Church
Tibet’s Sungmas, or oracles, are said to be the abodes of malignant spirits.
By Motor Trail Across French Indo- China
French Indo- China ( Vietnam, Laos and Cambodia) is a peaceful country of mist- draped hills, bamboo- fringed jungles, and Buddhist temples.

Be the first to review “National Geographic October 1935” Cancel reply 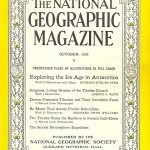