Nepal: A Little- Known Kingdom
Approachable only by a narrow corridor and with a Gurkha escort, this small Himalayan realm between India and Tibet is home to a people of innumerable castes and complex social rules.
Human Emotion Recorded by Photography
The camera demonstrates that all peoples share a universal language – – a delightful repertoire of facial expressions.
Tahiti: A Playground of Nature
Thousands of miles from the nearest continent, this steepled gem of wondrous green within a teeming coral ring, adorned with coconut palms and gigantic ferns, delights the eye.
The Making of a Japanese Newspaper
The progressive, independent Japanese paper Jiji- Shimpo embodies the spirit of its remarkable founder, a man who worked hard to Americanize his country.

Be the first to review “National Geographic October 1920” Cancel reply 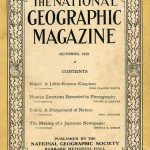