The Land of the Basques: Home of a Thrifty, Picturesque People, Who Take Pride in the Sobriquet, The Yankees of Spain
The author describes the hilly, industrious New England of Spain and notes that its people – – perhaps the oldest unmixed race in Europe – – are the nation’s leading athletes.
The Islands of Bermuda: A British Colony with a Unique Record in Popular Government
Settled by shipwrecked Englishmen on their way to Virginia in 1609, this coral cap atop an old volcano is a paradise of cedar, juniper, oleander, and bougainvillea.
Certain Citizens of the Warm Sea
The director of the Miami Aquarium describes the struggle for existence among the fish of Florida’s warm Gulf Stream waters – – and the thrill of the sportsman- angler when he joins in the fray.
The Geography of Our Foreign Trade
Traders are the quintessential geographers, economists, and anthropologists, to whom the names of foreign places mean more than mere red dots and circles on the map.

Be the first to review “National Geographic January 1922” Cancel reply 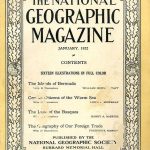