The Pink Birds of Texas
After nearly disappearing in the past 50 years, roseate spoonbills have returned to the Gulf Coast of Texas. These birds hatch white but later turn pink.
Sno- Cats Mechanize Oregon Snow Survey
Tucker Sno- Cats, automated snow sleds, have made the task of tracking and measuring snowfalls much easier for the U. S. Soil Conservation Service.
Jungle Journey to the World’s Highest Waterfall
Angel Falls in Venezuela is fifteen times higher than Niagara Falls or more than twice the height of the Empire State Building. Only a few brave souls have penetrated its remote canyon.
New Discoveries on the Mid- Atlantic Ridge
The second voyage of the National Geographic Society- Woods Hole- Columbia University expedition to the world’s longest mountain range yields much new information about the origin, age, and history of the Atlantic Basin.
Because It Rains on Hawaii
Although Hawaii has little in the way of natural resources, its abundant rain means that agriculture thrives, especially pineapple and sugarcane plantations. Tuna and tourists are also important to this tropical paradise.

Be the first to review “National Geographic November 1949” Cancel reply 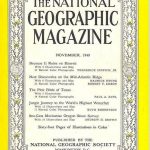