Armistice Day and the American Battle Fields
The November 11, 1918, cease- fire message that signaled the Allied victory in the First World War cemented the bond between America and France, where many U. S. soldiers lost their lives.
Beautiful Belgium, Restored by Peace
Cathedrals gleam and cities hum in postwar Belgium, where many buildings were rebuilt or repaired.
Gentlemen Adventurers of the Air: Many Regions of Canada’s Vast Wilderness, Long Hidden Even from Fur Trappers, Are Now Revealed by Exploring Airmen
Skippers of the sky increase access to remote sections of northern Canada, carrying people and supplies around the region.
Oxford, Mother of Anglo- Saxon Learning
Arriving in Oxford to research a book, the author takes on the mantle of an undergraduate, with the attendant rules and privileges developed over centuries of distinguished education.

Be the first to review “National Geographic November 1929” Cancel reply 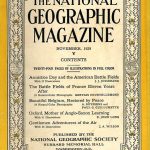