Brooklyn: The Other Side of the Bridge
The Dodgers are gone, but New York’s most populous borough still holds 2. 2 million diverse and disputatious people. Alice J. Hall and Robert W. Madden explore this quintessential bit of America.
The Wonderful Brooklyn Bridge { A Century Old, the Wonderful Brooklyn Bridge}
On its 100th birthday, one of the world’s great engineering achievements remains hale and hearty. John G. Morris and Donal F. Holway pay their respects.
Legacy From the Deep: Henry VIII’s Lost Warship { The Search for [ Mary Rose] ; Henry VIII’s Lost Warship: Legacy From the Deep}
For more than four centuries the Mary Rose kept her secrets. Archaeologist Margaret Rule tells the story of a great English naval disaster, and of discovery and raising of the wreck. With paintings by Richard Schlecht, introduction by Peter Miller.
Ethiopia: Revolution in an Ancient Empire
Nine years after Emperor Haile Selassie was deposed, Ethiopian literacy, health, and welfare are on the upswing. But the political rigors of a Marxist- Leninist leadership show no signs of softening. Article and photographs by Robert Caputo.
The Roadrunner: Desert Clown { Roadrunner: Clown of the Desert; Clown of the Desert: The Road Runner}
Seemingly zany antics are part of savvy survival by a lightless but fast- stepping member of the cuckoo family. By Martha Whitson and Bruce Dale.
Tasmania’s Wild Side { A Walk and Ride on the Wild Side: Tasmania}
In the rugged southwest corner of Australia’s island state, a battle rages: conservationists versus dam builders. Carolyn Bennett Patterson and photographers David Hiser and Melinda Berge record what may be lost forever if a mammoth hydroelectric projec

Be the first to review “National Geographic May 1983” Cancel reply 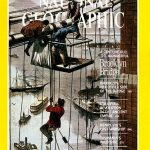