The St. Lawrence, River Key to Canada
The waterway that bears the legacy of the French- English competition for North America, continues to carry riches to and from the American heartland.
Canada Marks Her First Century
The Geographic’s Editor recalls the close relationship between the Society and Canada.
Micronesia: The Americanization of Eden
The U. S. Trust Territory of the Pacific Islands – – far- flung islands and atolls wrested from Japanese control in World War II – – is home to 93, 000 Micronesians, many still living like their ancestors.
The Hohokam: First Masters of the American Desert { First Masters of the American Desert: The Hohokam}
Excavations southeast of Phoenix, Arizona, expose the accomplishments of ancient Indians who farmed corn, squash, and beans here more than 2, 000 years ago.
Magnetic Clues Help Date the Past
With a new dating technique called archeomagnetism, scientists pinpoint the age of Roman kilns and fire pits of ancient humans.
Montreal Greets the World
The Quebec capital rushes to build facilities and freeways to play host to a world’s fair, Expo 67, and to celebrate the city’s 325th birthday as well as Canada’s centennial.

1 review for National Geographic May 1967 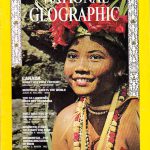