Foxes Foretell the Future in Mali’s Dogon Country
Precarious cliffside villages in the West African village of Mali shelter tribes that adhere to elaborate beliefs, expressed in sculpture and dance.
South Korea: Success Story in Asia
With foreign investment and eager laborers, the nation has made a dramatic recovery since the Korean War, despite attempts by North Korea to sabotage the progress.
The Magic Lure of Sea Shells
Abundant science and lore surround the marine mollusks that build their own shelters. Photographs include a sampling of the ten million specimens in the Smithsonian Institution in Washington, D. C.
Wisconsin’s Door Peninsula
An inviting strip of land along Lake Michigan offers water sports and camping in summer and Green Bay football in winter. Its name comes from the stormy strait called Door of the Death.
Wild Elephant Roundup in India
In the forests of Mysore, mahouts riding tame elephants gather young animals to train for logging chores and for carrying passengers.

Be the first to review “National Geographic March 1969” Cancel reply 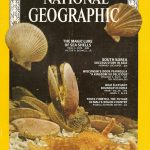