Scorpions: Living Fossils of the Sands
Older than the dinosaurs, scorpions have survived in deserts such as Arizona’s by preying on spiders, crickets, moths, and other small creatures.
Iran’s Shah Crowns Himself and His Empress
Mohammed Reza Pahlavi, who assumed power in 1941, waited until he had strengthened his country and produced a male heir before conducting a dazzling coronation in Teheran.
Mobile, Alabama’s City in Motion
The small southern city at a crossroads of river, forests, and the Gulf of Mexico expands its industries while retaining its historic charm.
The Friendly Isles of Tonga
Treated like a native after several visits, the author reviews the history and culture of these Polynesians, including their music, art, and tapa ( traditional Polynesian fabric) production.
Coronations a World Apart
The Geographic’s Editor summarizes the history of the monarchy in Iran and Tonga to introduce the stories that follow.
South Seas’ Tonga Hails a King
The King of the last Polynesian monarchy presents a Christian coronation for his public, a private kava ceremony for his chiefs, and a feast for all of his guests in Tonga.
The Highlands, Stronghold of Scottish Gaeldom
An independence born of solitude imbues Highlanders of northwest Scotland, who treasure poetry, music, and the Gaelic tongue.

Be the first to review “National Geographic March 1968” Cancel reply 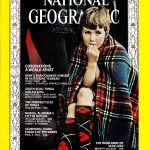