Siberia: Russia’s Frozen Frontier
Siberians cope with extreme cold, permafrost, and isolation to mine unparalleled natural resources in a sparsely populated region larger than the contiguous United States.
The National Gallery After a Quarter Century
A gift to the nation from Andrew Mellon, the Washington landmark has amassed art collections that rival the finest in Europe, according to the gallery’s director.
In Quest of Beauty
The son of the founder of the National Gallery describes the joy of collecting art, especially the 19th- century French Impressionists.
Squids: Jet- powered Torpedoes of the Deep
These carnivorous predators found in every ocean can change color, swim jet- fast, spray ink, and in some cases, light up at night.
Snowflake, the World’s First White Gorilla
Orphaned in Rio Muni, a Spanish possession in Africa, a white gorilla finds a home in the Barcelona zoo.
The Most Mexican City, Guadalajara
There’s more to the mile- high capital of Jalisco State than tropical flowers and antique charm; there’s cattle ranching, mining, cloth mills, and glassworks.

Be the first to review “National Geographic March 1967” Cancel reply 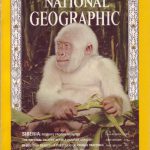