Pittsburgh, Pattern for Progress
The Steel City is being transformed by a 20- year revitalization project into a nuclear power capital and industrial research center in western Pennsylvania.
The Changing Face of Old Spain
The mountainous topography of Spain has discouraged change, while the long coastline has invited invasion. A staff writer and photographer explore this timeless contradiction while reporting on the economic progress and traditional customs of this emergi
Tree Snails, Gems of the Everglades
Threatened by Florida’s suburban sprawl, the colorful tree- climbing mollusk finds refuge in Everglades National Park. Photographs show the life cycle of Liguus fasciatus and its 52 color forms.
Israel: Land of Promise
During the 17 years since its founding, the state has welcomed more than a million new citizens from a hundred nations. Their adjustment, the history of the region, and the resident Arab population are examined in this comprehensive article.

Be the first to review “National Geographic March 1965” Cancel reply 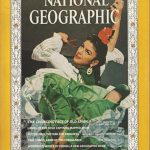