Hunting the Chaulmoogra Tree
The author, an agricultural explorer, goes in search of an indigenous Burmese tree that yields an oil that may provide a cure for leprosy – – and hopes to learn whether the species can be grown in Hawaii.
Prehistoric Telephone Days
Alexander Graham Bell describes the elements that led him in the direction of the telephone. In particular he credits his grandfather and father, both elocutionists and students of the mechanisms of speech.
The Hill Tribes of Burma { Among the Hill Tribes of Burma- -An Ethnological Thicket}
The Karen Hills between Rangoon and Mandalay are home to a score of mutually suspicious clans and tribes – – who explain their origins and diversity using curious myths.
The Pueblo Bonito Expedition of the National Geographic Society
The Society sponsors exploration of this colossal apartment house in pre- Columbian New Mexico.
Fighting Insects with Airplanes: An Account of the Successful Use of the Flying- Machine in Dusting Tall Trees Infested with Leaf- Eating Caterpillars
In an innovative airborne experiment to control insect infestations in trees, researchers make history in the annals of insect warfare. The procedure may also work on low- lying crops.
Amid the Snows of Switzerland
A collection of starkly beautiful black- and- white wintertime photos.

Be the first to review “National Geographic March 1922” Cancel reply 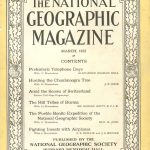