Spain and Morocco
Sixteen full- page color photographs celebrate the exotic traditions of Spain, Algeria, Morocco, Egypt, and Jerusalem.
Russia’s Democrats
Looking at the revolutionary events in Russia, the author finds them in accord with the underlying Russian spirit, long dampened by autocratic rule. Montgomery Schuyler notes the long- ago Mongol invasions and the subsequent Tartar curse, as the underl;
Soldiers of the Soil: Our Food Crops Must Be Greatly Increased
With the Unites States’ entry into war, the importance of a bountiful harvest is more important than ever. Our agricultural strengths and the challenges ahead are examined.
The Ties That Bind: Our Natural Sympathy with English Traditions, the French Republic, and the Russian Outburst for Liberty
Senator John Sharp Williams, in an address to the U. S. Senate, denounces the racial rhetoric coloring the recent debate over America’s entrance into the European war.
What Great Britain Is Doing
With her superior naval capacity, wealth, and industrial resources, Great Britain has become the linchpin of the Allied cause, assuming her historic role as the defender of the liberties of Europe.
War, Patriotism, and the Food Supply
While Americans are remote from the battle line, they nonetheless can make a vital contribution to the war effort by assuring an adequate food supply for their allies abroad.
Republics- -The Ladder to Liberty
Only a handful of republics existed worldwide when America declared independence in 1776. Now free governments exist in approximately four- fifths of the inhabited Earth. The republics of the world are described.

Be the first to review “National Geographic March 1917” Cancel reply 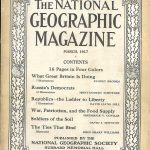