Tracking the Elusive Snow Leopard
Solitary hunter of Himalayan slopes, the snow leopard is one of earth’s rarest large cats. By radio signals, Rodney Jackson and Darla Hillard follow the carnivores through Nepal’s rugged Langu Gorge.
The Tea and Sugar Lifeline in Australia’s Outback
You can get almost anything – – from beer to sermons – – when this freight rolls into isolated towns on the bleak Nullarbor Plain. Erla Zwingle and photographer William Albert Allard ride the outback rails.
Bikini – A Way of Life Lost
Can the citizens of Bikini Atoll – evacuated from this atomic test site 40 years ago – – ever return to their Pacific island home? William S. Ellis investigates their options, and James P. Blair photographs their plight.
The World of Tolstoy
With broad vision and sympathy for all mankind, this Russian literary giant wrote novels for the ages and helped mold the ideas of Mahatma Gandhi and Martin Luther King, Jr. Peter T. White and photographer Sam Abell visit shrines of his literary labors.
Our Immune System: The Wars Within
An army of special cells on continuous search- and- destroy missions guards the body against disease – – but cancer, rheumatoid arthritis, and the deadly AIDS virus prove mighty enemies. Peter Jaret reports on the battlefront. Photographs by Lennart Nils

Be the first to review “National Geographic June 1986” Cancel reply 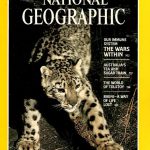