The Glory That Was Imperial Peking
Shadows of their former selves, the buildings of China’s Forbidden City stand empty within the boundaries of modern Peking ( Beijing) as the author tours these and other historical sites.
Explorations in the Gobi Desert
During a series of expeditions to Mongolia scientists unearth paleontological treasures including fossilized dinosaur eggs and tiny skulls from early mammals that coexisted with the giant reptiles, and observe the desert life of the Mongolians.
Hamburg Speaks with Steam Sirens
A colossal warehouse for all Germany, Hamburg holds its own among Europe’s premier ports, attracting international trade with its free port status as it becomes an international meeting place.

Be the first to review “National Geographic June 1933” Cancel reply 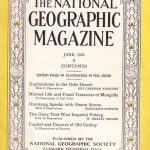