Through the Deserts and Jungles of Africa by Motor: Caterpillar Cars Make 15, 000- Mile Trip from Algeria to Madagascar in Nine Months
What begins as a demonstration of the Citroen automobile becomes a mission of exploration representing the interests of natural history, geography, government, and the military as the group reports on tribal culture and regional topography as well as the
The Conquest of Mount Logan, Canada’s Loftiest Peak { The Conquest of Mount Logan: North America’s Second Highest Peak Yields to the Intrepid Attack of Canadian Climbers}
A party organized by the Alpine Club of Canada sledges supplies overland through the Yukon Territory, braves blizzards on the ascent, and succeeds in reaching the summit of Mount Logan on June 23, 1925.
The Beauty of the Bavarian Alps
The Bavarian region of the central European mountains holds pleasant surprises for visitors seeking lofty mountains and glassy lakes not overrun by tourism.

Be the first to review “National Geographic June 1926” Cancel reply 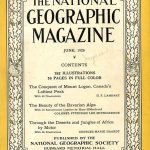