The Bonins and Iwo Jima Go Back to Japan: An Era Ends For the Yankee Isles
After World War II the U. S. Navy administered these Pacific islands, originally settled by New Englanders and Japanese colonists; now the islands revert to Japan.
The Canadian North: Emerging Giant
Canada takes the measure of its vast resources, from uranium to oil sands, in the largest undeveloped realm in the Americas, the home of Eskimos and Indians.
Forest Fire: The Devil’s Picnic
To their age- old arsenal of shovel, ax, earth, and water, fire fighters add modern techniques to attack the worst fires in the Pacific Northwest in recent history.
Lombardy’s Lakes, Blue Jewels in Italy’s Crown
Lake Como and other glacier- carved basins in the Italian Alps once attracted Roman nobility – – now they draw travelers to elegant waterside resorts and cafes, castles, and vineyards.
Hyenas, the Hunters Nobody Knows
Long considered a scavenger, the spotted hyena of Ngorongoro Crater in Tanzania is a skilled hunter who forms packs that take down wildebeest and lion.

Be the first to review “National Geographic July 1968” Cancel reply 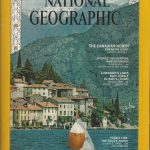