The Sealing Saga of Newfoundland
Open season on seals in the ice- clogged waters near Newfoundland also poses risk to hunters, who brave tight quarters and dangerous conditions for the payoffs that sculps – – sealskins with an adhering layer of fat – – bring in port.
Exploring the Wonders of the Insect World
By constantly adapting to the crevices in creation left by the vertebrates, insects top the charts as our planet’s most prolific form of animal life.
Insect Rivals of the Rainbow
Biographies of insect families including wasps, beetles, and moths reveal how insects in one region are brilliant while their cousins elsewhere are drab.

Be the first to review “National Geographic July 1929” Cancel reply 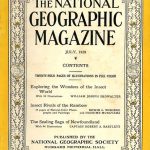