Where Our Moths and Butterflies Roam
North American Lepidoptera family members, showcased in color, thrive in nearly every corner of the continent, from the Tarctic skipper to the St. Lawrence tiger moth.
Strange Habits of Familiar Moths and Butterflies
Some fanciful, some functional, butterflies’ and moths’survival habits include fooling potential predators with camouflage and recognizing similarities among edible plants.
Sindbads of Science: The Narrative of a Windjammer’s Voyage Among Islands of High Adventure in the South Atlantic { Sindbads of Science: Narrative of a Windjammer’s Specimen- Collecting Voyage to the Sargasso Sea, to Senegambian Africa and Among Island
A team of nautical naturalists sets sail from Connecticut bound for the South Atlantic to glean information about rare birds and queer beasts of land and sea for the Cleveland Museum of Natural History.

Be the first to review “National Geographic July 1927” Cancel reply 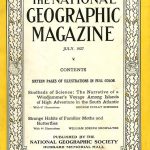