The Year In Pictures – A Special Issue

Five of our Photographers reflect on 2020. Essay: In a year of striking images, why we could not look away.

The Year That Tested Us

How much can any of us withstand? Deaths by coronavirus, until morgues are packed. Calls for racial equality, answered with backlash. The Earth scoured by locusts, hurricanes, fires. How much? And then how much more?

The Year That Isolated Us

A funeral with no mourners. A family visiting through a window. A virtual happy hour. Around the world, billions of people simultaneously experienced aloneness, separated from companions and solace.

The Year That Empowered Us

The Year That Hope Endured

A Daylong Show of Commitment

Fifty-seven years to the day after Martin Luther King, Jr. delivered his “I Have a Dream” speech in front of the Lincoln Memorial, another march for civil rights and social justice drew thousands of people to the National Mall in Washington, D.C.

On The Cover:
In 1890 this statue of Gen., Robert E. Lee was placed on Monument Avenue in Richmond, Virginia. The first Confederate monument there, it was the last one standing in late 2020 as its fate was argued in court. Kris Graves’s photos show the statue covered in graffiti and lit with projections. It’s a powerful symbol of the racial reckoning under way. 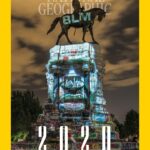