The World of Explorers

Scientists are trying to learn what drove us out from Africa and on to the moon and beyond.

To the stars. Do we have the right stuff to go?

Ecuador’s Yasuni Park has it all – treetop orchids, prowling jaguars, nearly 600 species of birds … and oil craved by developers.

His companions died. Food was nearly gone. And Douglas Mawson still had 95 polar miles to go.

We breathe in millions of microbes. But we’ve only just begun to study them.

Be the first to review “National Geographic January 2013” Cancel reply 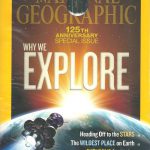