The Waurá: Brazilian Indians of the Hidden Xingu
The Amazon forest provides one of the last shelters for indigenous peoples, among them a peaceful group that keeps the secret of pottery making.
Stalking Seals Under Antarctic Ice
Scientists dive to the realm of huge Weddell seals to learn how they navigate, forage, and breathe.
Saudi Arabia: Beyond the Sands of Mecca
An American photojournalist who converted to Islam, obtained permission to photograph Islam’s holiest sites during his survey of the nation’s Bedouin camps, Nabatean ruins, and oil refineries.
Finding Rare Beauty in Common Rocks
Wafers of stone photographed through a petrographic microscope display colors and abstract shapes that suggest modern art.
Profiles of the Presidents: The Last of Five Articles { The Atomic Age: Its Problems and Promises}
In the final installment of his series on U. S. Presidents, a Harvard professor discusses the tenures of five presidents from Franklin D. Roosevelt to Lyndon B. Johnson.

Be the first to review “National Geographic January 1966” Cancel reply 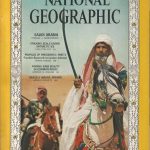