Profiles of the Presidents: The Second of Four Articles { A Restless Nation Moves West}
Through biographical sketches of U. S. presidents from Andrew Jackson to James Buchanan, a Harvard historian recounts the development of America, 1829- 61.
Drowned Galleons Yield Spanish Gold: Adventurous Divers in Florida Bring Up the 20th Century’s Richest Find of Sunken Treasure
A treasure hunter dredges off Florida’s east coast near Vero Beach. Confirming historical records, he recovers gold and porcelain, among other treasures, of the Spanish Plate Fleet that sank in a hurricane in 1715.
The Making of an Astronaut
The director of NASA’s Manned Space Center near Houston, Texas, details the training of 28 men for the Gemini and Apollo programs. On field trips to the Panamanian jungle and the Grand Canyon, the men practice survival tactics in preparation for work on
American Special Forces in Action in Viet Nam: How Coolness and Character Averted a Blood Bath When Mountain Tribesmen Rose in Revolt
A veteran foreign correspondent visits U. S. Special Forces and finds himself in a war within a war. Fomented by the Vietcong, mountain tribesmen revolt against the South Vietnam government in a bid for autonomy.
Royal Wedding at Jaisalmer
The descendant of the founder of a Rajasthan kingdom in western India, follows the intricate customs of her Hindu religion to marry the maharaja of Rajpipla, in a spectacular four- day ceremony.

Be the first to review “National Geographic January 1965” Cancel reply 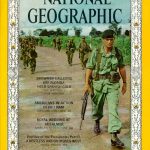