The Columbus of the Pacific: Captain James Cook, Foremost British Navigator, Expanded the Great Sea to Correct Proportions and Won for Albion an Insular Empire by Peaceful Exploration and Scientific Study
Cook’s exploratory voyages, which began in 1768, revised maps of the Pacific Ocean. Landmarks of his voyages include the Bering Strait, Vancouver Island, Japan, Hawaii, Tahiti, and New Zealand.
Jamaica, the Isle of Many Rivers
A strategic location in the path of flourishing Caribbean trade once made Jamaica a popular hunting ground for pirates. Now its plantations grow cane, spices, and other crops, and natural beauty delights sightseers.
Life on a Coral Reef: The Fertility and Mystery of the Sea Studied Beneath the Waters Surrounding Dry Tortugas
In the submarine world off the coast of Key West, Florida, sea creatures use camouflage and symbiotic relationships to survive among the coral reefs. The article explains how pioneering color photos, published in this issue, were made.
The First Autochromes from the Ocean Bottom: Marine Life in Its Natural Habitat Along the Florida Keys Is Successfully Photographed in Colors
Icthyologist W. H. Longley and National Geographic photo technician Charles Martin employ a flash- light- powder mechanism to capture images from 15 feet underwater on an autochrome plate – – the first published natural- color images made beneath the sea

Be the first to review “National Geographic January 1927” Cancel reply 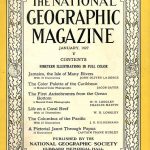