Chichen Itza?, an Ancient American Mecca: Recent Excavations in Yucatan Are Bringing to Light the Temples, Palaces, and Pyramids of America’s Most Holy Native City
An archaeological expedition to the Yucatan Peninsula of Middle America yields vast architectural ruins of a Maya civilization that flourished between the 6th and 15th centuries.
Seeing America from the Shenandoah : An Account of the Record- making 9, 000- mile Flight from the Atlantic to the Pacific Coast and Return in the Navy’s American- built, American- manned Airship
A passenger’s- eye view of the transcontinental journey of a zeppelin airship attempts to show the fitness of such transportation as viable and useful for peacetime travel and exploration.
Interviewing the Stars: How Twentieth Century Astronomers Are Inducing the Heavens to Reveal Their Secrets
Using the technology of spectroscopes, scientists at the Mount Wilson and Yerkes Observatories examine the composition of stars and calculate their relationship to Earth.
The Palace of Versailles, Its Park and the Trianons
The grandeur of Versailles provided a suitable setting for the opulent court life of France’s Louis XIV. The spacious, mirror- filled palace and the elegantly rustic summer homes known as trianons still define 18th- century style.

Be the first to review “National Geographic January 1925” Cancel reply 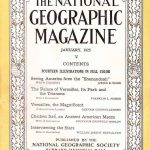