Family in Search of Prehistoric Man: The Leakeys of Africa { The Leakeys of Africa: Family in Search of Prehistoric Man}
Probing the depths of Olduvai Gorge in Tanzania and sites in Kenya, Louis S. B. and Mary Leakey and their three sons uncover fossils of humans and animals that date our prehistory by hundreds of thousands of years.
Birds That See in the Dark With Their Ears: South American Oilbirds Navigate by Echo in the Blackness of Their Cave Homes
Like bats using sonar, cave- dwelling oilbirds of South America navigate the rock walls where they nest in darkness. The author studies these creatures in Peru’s Cave of the Owls.
North Toward the Pole on Skis
Embarking from Canada’s Ellesmere Island, the six- man Staib Expedition, with a support party of 50 dogs, reaches the farthest point north on foot, since Robert E. Peary in 1909.
Incredible Photograph Shows Earth From Pole to Pole { Extraordinary Photograph Shows Earth Pole to Pole}
Reading heat variations on Earth, a sensor on the weather satellite Nimbus 1 records landmarks and cloud formations on September 6, 1964.
Four- Ocean Navy in the Nuclear Age: Revolutionized by the Atom, Far- ranging United States Forces Afloat Contribute Unprecedented Strength to the Cause of Peace
Revolutionized by nuclear- powered engines, U. S. submarines, aircraft carriers, and cruisers roam the globe practicing maneuvers in a show of force that serves as a deterrent to attacks.
Picture- Book Portofino { Time Turns Back in Picture- book Portofino}
Skipper of the ocean racing yawl Finisterre makes harbor in an Italian Riviera village determined to preserve its historic charm.

Be the first to review “National Geographic February 1965” Cancel reply 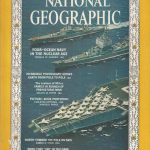