Befriending Nature’s Children: An Experiment With Some of California’s Wild Folk
Using a trip- wire camera, a California woman photographs the small menagerie she feeds near her wooded Pasadena home.
Some Forgotten Corners of London: Many Places of Beauty and Historic Interest Repay the Search of the Inquiring Visitor
One step removed from typical guidebook destinations, diverting spots such as Covent Garden, Club Row Market, and Temple Bar charm travelers who seek them out.
Antarctica’s Most Interesting Citizen: The Comical Penguin Is Both Romantic and Bellicose
Adelie penguins waddle the icy turf their entire lives, fighting for mates, laying eggs, and intriguing humans with their comic ways and starched shirt and swallowtail coat appearance.
Royal Copenhagen, Capital of a Farming Kingdom: A Fifth of Denmark’s Thrifty Population Resides in a Metropolis Famous for Its Porcelains, Its Silver, and Its Lace
Danish farm cooperatives help sustain city dwellers in this harbor town bustling with international commerce and cosmopolitan culture.
Tokyo To- day
A former ambassador to Japan reports on the reconstruction of the capital city, devastated by the 1923 earthquake.

Be the first to review “National Geographic February 1932” Cancel reply 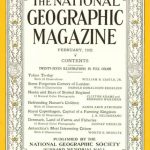