The National Geographic Society
At a meeting of the Board of Managers, O. H. Tittmann was unanimously elected President of the National Geographic Society.
A Wonderland of Science
Inside the U. S. Bureau of Standards all manner of wondrous measuring devices – – some capable of weighing an object to the 1/ 100, 000, 000th part – – protect us from false readings, while guaranteeing the integrity of our number- hungry science and tec
A City of Realized Dreams
Rising from the ashes and rubble of the great 1906 earthquake, San Francisco rebuilds to host the Panama Pacific International Exposition.
Europe’s Endangered Fish Supply: The War and the North Sea Fisheries
In the midst of World War I, fishing boats sweep the seas for mines instead of seining for fish, creating a serious shortage in Europe.
The Story of Machu Picchu: The National Geographic Society- Yale University Explorations in Peru { The Story of Machu Picchu: The Peruvian Expeditions of the National Geographic Society and Yale University}
Yale professor Hiram Bingham describes the mysterious Inca city that he began excavating, high in the Andes, in 1912.
Mu?nster- -The Town of Many Gables { The Town of Many Gables}
The church spires and gabled houses of Munster are the initial stop on this German tour of towns and cities in the Harz Mountains.

Be the first to review “National Geographic February 1915” Cancel reply 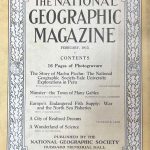