The Mekong, River of Terror and Hope
Four nations that share its undammed waters – – South Vietnam, Cambodia, Laos, and Thailand – – hope to harness the river for irrigation and power but often fall victim to its use by enemies.
Reunited Jerusalem Faces Its Problems
Warfare in 1948 divided the holy city – – after the Six Day War of 1967 Israelis annexed the Arab sector, vowing never to give it up.
Dragon Lizards of Komodo
Only about a thousand of the world’s largest lizards survive on four tropical Indonesian islands.
Williamsburg, City for All Seasons
The capital of colonial Virginia echoes with the voices of George Washington, Thomas Jefferson, and Patrick Henry and has been restored to give the authentic flavor of its early craft shops, classrooms, and taverns.
Snow Festival in Japan’s Far North
Giant sculptures of ice and snow decorate the city of Sapporo in Hokkaido during its Snow Festival.

Be the first to review “National Geographic December 1968” Cancel reply 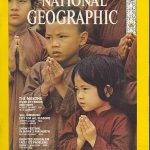