New Scarlet Bird in Florida Skies- -And a Pink One Too
A bird lover imports eggs of the scarlet ibis from Trinidad for incubation in a white ibis rookery near Miami – – generations later, some offspring of scarlets and whites are salmon pink.
The Sailing Oystermen of Chesapeake Bay
Working sailboats called skipjacks face the end of a colorful era and a hardy way of life, as Maryland ceases to favor the sailing craft over motorized dredgers.
Lands of the Bible Today: New Wall Map Presents the Pivotal Middle East, With a Wealth of Historical Notes
A wall map distributed with this issue presents the Middle East through time, including areas occupied by Israel after the Six Day War of May 1967.
Eyewitness to War in the Holy Land
An American photojournalist is swept up in the Six Day War of May 1967 as Israeli troops capture Sinai, the Gaza Strip, and portions of Syria and Jordan.
Mars: a New World to Explore { Mars: A New World to Explore}
Innovative technology promises to unlock the secrets of the red planet, writes a Harvard astronomer, who speculates on what those secrets are.
Where Jesus Walked
Ancient traditions persist in the Holy Land that Jesus knew, in a tumultuous era that parallels our own.
Jamaica Goes It Alone
A former British colony, the verdant Caribbean island- nation celebrates its fifth year of independence.

Be the first to review “National Geographic December 1967” Cancel reply 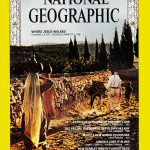